Sunday, January 23, 2019 || By Michael Romain || @maywoodnews
During a special meeting held June 18, the Proviso Township High Schools District 209 Board of Education unanimously approved the creation of a summer employment program within the district. 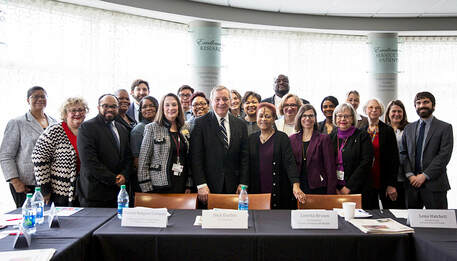 Photo: Loyola University Chicago
PP4H Members Host Roundtable Discussion with Sen. Durbin
Senator Dick Durbin met with Proviso Partners for Health, which is a partner of the SBHC,  on March 8, 2019 to learn about our health equity and systems-change work. The Senator’s Chicago HEAL initiative is working to reduce community violence with Loyola Medicine and nine other Chicago-area hospitals and the communities they serve through upstream efforts that support thriving communities.
Proviso Partners for Health recognizes that local jobs, healthy and affordable food, and a shared sense of safety are all essential to creating a culture of health in our Proviso community. We are excited to welcome Sen. Durbin back for a community tour this spring to learn more about the transformative work our partners are leading to sustain a thriving Proviso!
­
Powered by